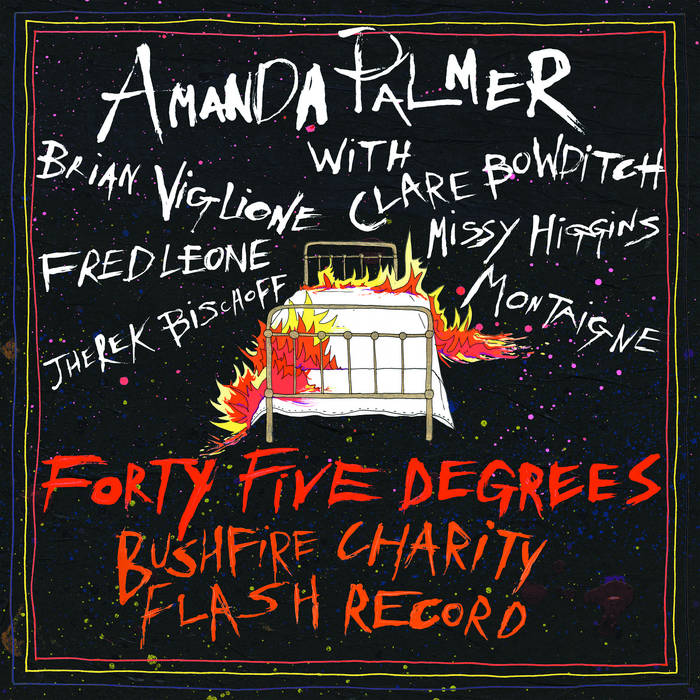 Mushaboom she's a queen.
ever...
3hs in Leipzig

brutalcow Another clever and genuine performance from the queen. Favorite track: My Favorite Things (BUSHFIRE EDITION).

this whole album was made possible with support from 15,000 patrons funding me at patreon.com/amandapalmer. i would not have had the ability to do this without them.

all profits from this album go to Firesticks Alliance; an Indigenous led network re-invigorating and teaching cultural land burning and management.


"BEDS ARE BURNING (with MISSY HIGGINS)"
originally by MIDNIGHT OIL


"SUCK IT UP, BUTTERCUP" - a new song by amanda, for launceston
amanda palmer - piano & vocals

album layout designed by andrew nelson at down in the valley, kingston, NY

bass and guitar engineered by jherek bischoff at sweethaven in los angeles, CA

thanks for the autoharp loan, mic hubbard

Track Name: My Favorite Things (BUSHFIRE EDITION)
Raindrops on roses
And whiskers on kittens
Bright copper kettles and warm woolen mittens
Brown paper packages tied up with strings
These are a few of my favorite things

Rain never falling and whisked-away kittens
Evacuations and cats people live in
Kangaroos burning and birds with no wings
These are a few of my favorite things.

Beautiful sunsets ironically colored
Homes with no power and kids with no mothers
Smug politicians with necks we could wring
These are a few of my favorite things.

when the dogs die
when the bees die
when i’m feeling blue
i’ll simply remember my favorite things
OH NO I’LL BE DEAD LIKE YOU.
Track Name: Beds Are Burning (with MISSY HIGGINS)
LYRICS:

The time has come to say fair's fair
To pay the rent now, to pay our share

Four wheels scare the cockatoos
From Kintore, east to Yuendemu
The Western Desert lives and breathes
In forty-five degrees

and a man with a gun

and then i saw my mother
walking out of the embers

The backbone of this country's broken
The land is cracked and the land is sore
Farmers are hanging on by their fingertips
We cursed and stumbled across that shore
What for?

And the world won't stand still

Blue collar work it don't get you nowhere
You just go round and round in debt
Somebody's got you on that treadmill, mate
And I hope you're not beaten yet

I hear much support for the monarchy
I see the Union Jack in flames, let it burn
I see Namatjira with dignity
I see Truganini's in chains

Right down the line

Well they were standin' on the shore one day
Saw the white sails in the sun
Wasn't long before they felt the sting
White man, white law, white gun
Don't tell me that it's justified
Cause somewhere someone lied
Yeah, well someone lied
Someone lied
Genocide
Well someone lied oh

Solid rock
Standin' on sacred ground
Livin' on borrowed time
And the winds of change
Are blowin' down the line
No, oh! Oh no!
Track Name: Regional Echo
Noisy Miners
Bully the suburbs
Out beyond the haze
Seaside holiday houses
Lay quiet as a grave
Tombs of dreams past
Wealth gone to waste
The Australian dream is fading
Stolen anyway

If you like Amanda Palmer & Friends: Forty-Five Degrees - A Bushfire Charity Flash Record, you may also like: