Amanda Palmer Goes Down Under 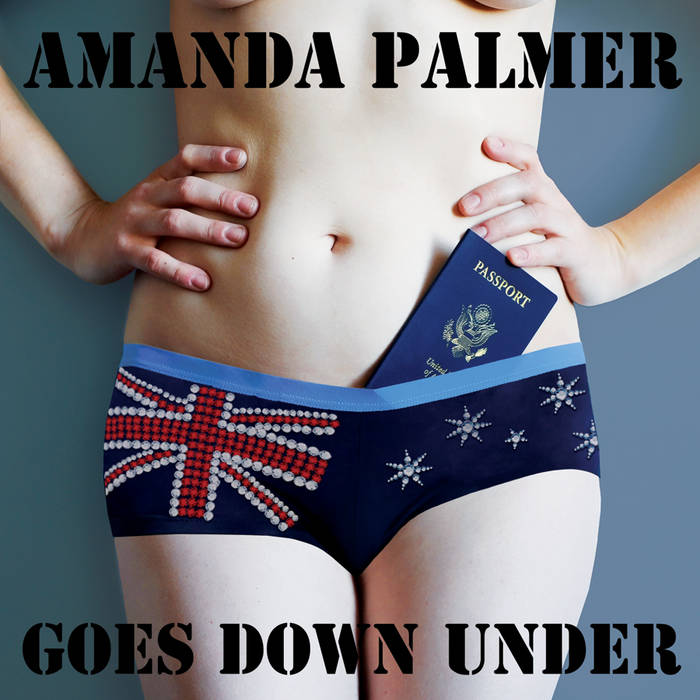 spacehawk.mp3 What do I say? I love Amanda. She's inspirational, not just her music but her whole personality! This album is fun, serious, heartwarming and inspirational Favorite track: Map of Tasmania (feat. The Young Punx).

Sara Klips There are few songs as riotously fun and blatantly feminist (IE: its about time there are rock songs about vaginas with fun euphemisms like "Map of Tasmania") as this one is. Favorite track: Map of Tasmania (feat. The Young Punx).
more...

hello listener!
i am currently hosting my music here for FREE / NAME YOUR PRICE...
and this is possible because i am using patreon, a new crowd-support platform
now housing thousands of my listeners who believe in direct arts patronage!
if you are hard up and can't afford to download this, PLEASE TAKE IT FOR FREE.
if you're a one-time listener and would like to donate, please consider dropping a dollar or more in the blank box.
if you're a supporter of my patreon: take what you want, and THANK YOU!!!
YOU ARE WHAT MAKES ALL THIS FREE CONTENT POSSIBLE FOR EVERYONE ELSE!

to support my patreon, where you can hang me with me, the community, and get special webcasts, blogs
and other Things I Make , go here: www.patreon.com/amandapalmer

Lyrics and more cool stuff from "Down Under" coming soon!
Follow @AFPwire on Twitter to find out more!

5. “In My Mind” written by Amanda Palmer. Featuring Brian Viglione on Percussion. Recorded at Mixmasters in Adelaide with Mick Wordley. Additional Recording by Martin Bisi in Brooklyn, NY.

6. “Bad Wine and Lemon Cake” performed by Amanda Palmer and The Jane Austen Argument Written by: Tom Dickins. Arranged by: Jennifer Kingwell. Published by Apra. Recorded Live at the Adelaide Fringe Festival in a tent in a garden.

8. “On an Unknown Beach” written by Jefferies Peter Bryce. Published by Apra. Recorded at Mixmasters in Adelaide with Mick Wordley

All mixed by Mick Wordley at Mixmasters in Adelaide, Australia except "Map of Tasmania," mixed by Hal Ritson.

Mastered by Mick Wordley too. He does it all.

Amanda Palmer appears courtesy of Her Fucking Self.


Special Thanks
i would love to thank my australian posse: mick & his family; tom, jen, robyn, mikelangelo, lance & meow meow (WHAT. IS. HIGH?); peter & claire, my adopted melbourne family, and steven mitchell wright & all the members of the danger ensemble for making art with me. thanks to everyone who's put me up, fed me, loaned me pianos and ukuleles and shit and generally helped me circle the dream.
sincerest gratitude to kyle cassidy, marianne wilson, milton wordley, elissa maloney, azaria, rachael pyper and hazel dooney for contributing gorgeous art for this album.
giant thanks to virginia & the folks at the sydney opera house.
huge fucking love to my team chaos: beth, sean, arielle, superkate, hayley & eric, along with honorary chaos-teamers kayla & john and chaos-interns rachel, ashleigh, lauren & autumn. giant thanks and love to ron nordin for ongoing generous support, and love to my moxy neilhimself, anth, laura, my family and all the other folks who make amanda fucking palmer possible.